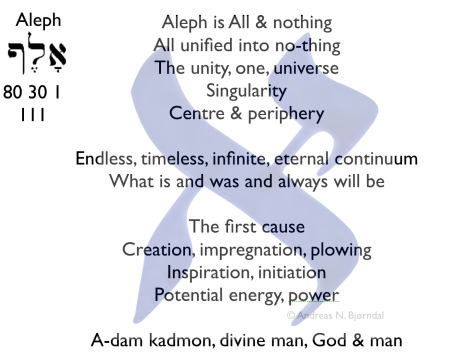 Suares:  Aleph, no. 1, is the unthinkable life-death, abstract principle of all that is and all that is not.

Ox, The plow the ox pulls, the horns of an ox
Tame, train (animals)
To become used to, to teach, to study
To learn, to strain oneself
Clan
One, first
One thousand, one million

∑ One, first power, singularity, all and nothing, the potential to become

The pictograph used was the head of an ox.

Fabre de Olivet; First character of the alphabet in nearly all
known idioms. As symbolic image it represents universal
man, mankind, the ruling being of the earth.
In its hieroglyphic acceptation, it characterizes unity, the central
point, the abstract principle of a thing.
As sign, it expresses power, stability, continuity.
Some grammarians make it express a kind of superlative as in Arabic; but
this is only a result of its power as sign. On some rare
occasions it takes the place of the emphatic article H
either at the beginning or at the end of words. The rabbis
use it as a sort of article. It is often added at the head
of words as redundant vowel, to make them more sonorous
and to add to their expression.

Its arithmetical number is 1 and 1000