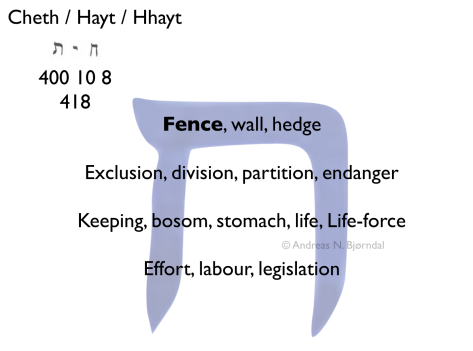 Suares: Hhayt, no. 8, is the sphere of storage of all undifferentiated energy, or unstructured substance. It expresses the most un-evolved state of energy, as opposed to its achieved freedom in Zayn.

As we progress we see that each Aut (letter) is in a sense coming out of the previous Aut in a natural flowing fashion. Here we have in a sense the dim beginning of existence. Although still a seed and a first line element, Hhayt (8) represents the summing up or storage of the various possibilities represented by Zayn (7). It can be viewed as a pool of unstructured energies not specifying any state of energy itself. In quantum physics it is the sum over states, the wave function while Zayn (7) is the probability amplitude for a particular state. It is also the collective unconscious of Jung’s psychology. But remember it is still unactualised as such because it is still in the seedling state. Suares, Spectrograms