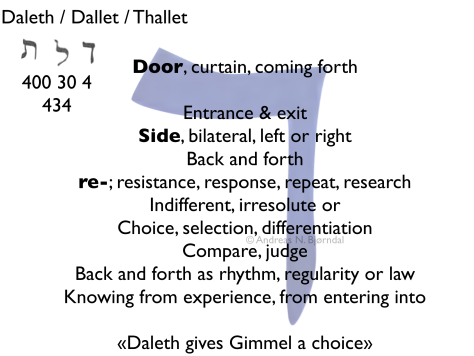 Suares; Dallet, no. 4, is physical existence, as response to life, of all that, in nature, is organically active with Ghimel. Where the structure is inorganic Dallet is its own resistance to destruction.

Meaning of Daleth
Door, leaf, folding door, curtain, two leveled door, a shut door, doorway,
tent flap, porch, roof, gate, portico;
womb, vagina (delta), the doorway (muscles) of the womb;
tablet, page of a manuscript, scroll, column of a book,
half of the ten commandments,
first half of a verse

Dallet (4) is all resistance or response to movement i.e. the response to all Ghimel of the Bayts containing Aleph. Dallet can be viewed as the interaction between material objects in states of motion. Dallet is Newton’s discovery that between any two bodies there is an equal and opposite reaction, i.e. a response. Is is also the principle of inertia which is logically connected to the action-reaction concept of Newton. It gives the hardness of all solid material and it is the means by which we learn or take things in memory for it is the response or resistance offered to Ghimel that is recorded. The prefix “re” is Dallet.